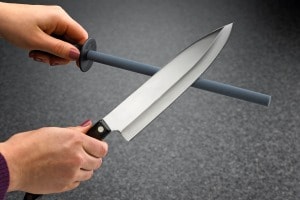 Knives are the most important kitchen tools without which no kitchen work could be carried on. Knives are put to multi uses and they hold a prominent place in a kitchen. They work best when they are sharp and jagged; blunt knives spoil the entire work and at the same time, it kills a lot of your time. Sharp knives are easy to work with, as they make your work more convenient and fast as compared to a dull blunt knife, which is risky to work with. The point is to find a way through which we could maintain the knives in such a way that they work as new and chop the various groceries conveniently.

Let’s learn about the various steps through which you could sharpen the kitchen knives and make them more effective to perform in the kitchen. Different people use different ways of sharpening, and here we would discuss about one of the common ways that would make your work easier.

Below are the easiest and quicker ways of sharpening a blunt knife, which uses simple tools and method.

The first and foremost requirement is to collect the various materials that are to be used for the process. To sharpen your dull knife, you need just two simple tools, which include a synthetic sharpening stone and a magnetized iron rod. Both of these tools are easily available at your nearest hardware store. 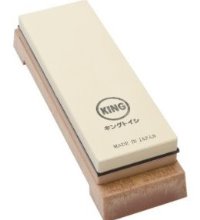 Hold the knife with your hand carefully, and rub it’s blade on the grainy side of the stone by putting it at 20 degrees on the stone and keep gliding it on the stone, that is, rubbing to perfection. Keep repeating the process until the blade sharpens which could be found out while you notice a rough sound from the process. 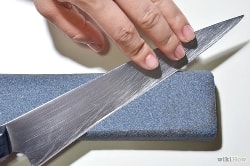 Hold the blade against the synthetic sharpening stone, and now rub the other side likewise so that you could evenly sharpen the knife and make it equally good from both the sides. 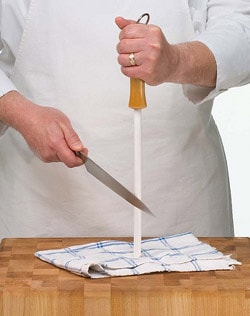 Keep using magnetized rod, turn the knife and rub the other side in the same way but in clockwise direction. This process is carried on to remove the excess abrasiveness from the blade, so that it could be used conveniently. The magnetic rod is used to polish the blade and make it ready to use.

Now your kitchen knife is ready to be used and you will no more have to struggle with your blunt knife and get irritated by it. Through these easy steps, you could conveniently sharpen your kitchen knife, and the various tools that are used in the process can be easily bought from a nearby store.

How to choose the best Kitchen Knives

Kitchen Knives – Choose the Right One for Each Task